Although Milan is clearly Italy’s fashion capital with Florence nipping at its heels, Rome still has its own panache. As I walked home a few nights ago, I came upon two models in front of the newly reopened Hotel de la Ville. They swished and swayed in Andre’ Laug flame red coats, pretending not to be freezing while photographers snapped away.

A friend of mine, Bert Keeter, is Laug’s designer and he had told me of the photo shoot for the atelier’s spring/summer collection but I had no idea they’d be doing part of it outside after sundown.

I took a few photos myself and scurried off, glad to be bundled up in a heavy coat on an especially chilly winter night.

For starters.  During the aforementioned trip to Athens, I decided to buy a fur coat because Greece has a centuries-old tradition for making some of the best. It was the 1970s and PETA* had yet to be founded, so you’ll forgive me, ok? I was teaching at a university, had a few extra pennies, and this was a BIG deal for me. A French friend, who was living in Athens, said he’d help me out so we waited until the sun started to set because no one with any sense shops during the day in summer. I grew up in St. Louis, Missouri and thought I knew what hot was . . . until I spent a week in Athens in August.

We made our way through the muddling market that tumbled forward and backward along cobblestone streets. As the sunlight dove into the Aegean Sea, electric light bulbs strung along the streets took over its job. When I finally found ‘my’ coat, we sat down with the store owner and bargained politely over steaming coffee that soothed my throat and surprisingly didn’t spike my temperature. Once we agreed on a price, I cheerfully handed over my credit card.

George (yes, his name was the ubiquitous George so many Greek men are named) then explained that there was a spending limit on my card for any single purchase. I was beaten, I thought.

“That’s all right,” he continued. “You can wire me the rest when you get back to the States.”

“Oh, but I do. Everything I need to know about you is written on your face.”

Well, that just about knocked me off my feet and into the mountain of fur coats piled up behind me. I immediately thought of how many times my colored ‘face,’ had gotten me kicked out of a restaurant or gotten me called the ‘N’ word, or gotten me turned away from a movie theater growing up in my own backyard. And here I was in a very foreign and distant backyard with a complete stranger telling me that my face was all he needed as collateral.

“That’s so kind of you but isn’t there another way? I’d really like to pay you now.”

He rubbed his brow, took my card and disappeared but returned quickly with a fellow shop owner waving a receipt for me to sign.

“We’ll split the amount in two. You sign his and mine.”

With my coat bundled up in a shopping bag, I left but not before hugging them both.

I’ve thought of that incident time and again. In fact, it resonates whenever I experience this type of color-blind kindness abroad. Don’t, however, take me for a Pollyanna. I know the times they are a-changing and Europe ain’t what it used to be. But it still happens. Trust me.

*PETA (People for the Ethical Treatment of Animals, founded in 1980)

I’ve been traveling the world for decades, making stops (long and short) in more than forty countries. As a black person from the United States of America, I defined myself as a black American whenever I was asked until late one summer night in Athens’s Plaka neighborhood. I proudly announced my provenance to our waiter. He, however, wasn’t having it.

“No!” he insisted. “You are a black international!”

That stuck with me. He saw me untethered to any nation. Although that’s an appealing idea (especially in this present-day climate), I feel firmly attached to my country and my peculiar vision. No matter where I am on this planet, I perceive the world through a black American lens.

I’ve chosen Nightingale Noir as my moniker because of the bird’s creative and seemingly spontaneous song and I aspire to bring my stories to you similarly while keeping them noir. My recollections will include tales from the past as well as current opinions as I continue to travel the globe and wander around Rome, where I’ve lived this time since 2001.

And why should you care? Well, if you are a black American, I hope you do because ‘we’ have a particular way of observing, born out of our inimitable history and out of our complicated relationship with the United States. It colors how we live, think, and move about our country. And how does it inform us when we voluntarily move outside our borders? I intend to present how one black person views the world from overseas. I also hope this will encourage you to travel and ‘see’ with your own eyes.

And if you are not a person of color? Why should you hitch a ride on my wings? The issue and effects of ethnicity are pervasive, no matter where you are. I grew up during the heart of the modern civil rights movement in the United States, shepherded by parents deeply committed to and actively engaged in its evolution. Then I launched into a career of international, cultural diplomacy. I offer you a rare opportunity to explore my unique world view — through the prism of race and geography. I believe my stories will offer unexpected insights, some surprises, and even some humor — to open up your perspective. Granted, my blog is international in scope and not grounded in the “black experience” as it is lived daily in the United States. If you, however, choose to follow me, you will see how even when one roams the globe, this paradigm travels alongside.

By the way, my blog will wonder off its black track now and then. Whenever something strikes my fancy (be it a stroll past astounding Roman monuments on my way to the city’s premier organic market or my take on the Venice Biennale or running into an haute couture photo shoot on the street where I live), I’ll include it as well.

Hope you enjoy the ride! Join me tomorrow for my first blog. 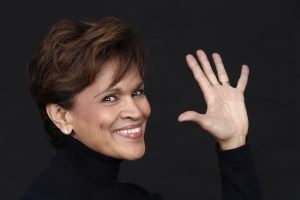